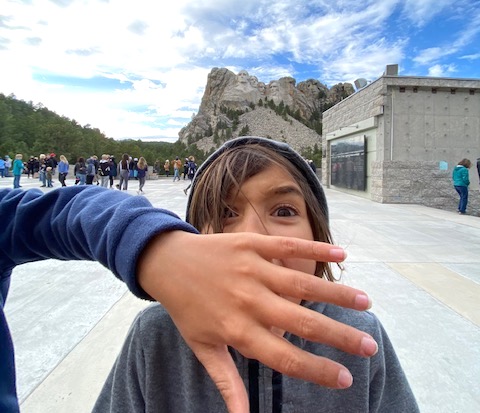 I’m sitting on my bed, the light from the laptop iluminating my face in the dark room. Tsuri is asleep beside me. The kids are still rolling around in bed, asking for water, complaining it is too dark, too light.

Our evenings often look like this. Tsuri conks out early after a day of driving, the kids drag out bedtime for way too long, and I stare at a screen for a couple hours and then close my eyes.

So basically the lesson here is – don’t be afraid to deprive your children.

Despite everything we’re getting use to, every day has been a new adventure.

Since that shitty day I told you about in our last blog, we headed to another area in south Dakota. This was really our first journey into the nature of the area. We toured the badlands, the black Hills, and Spear Fish.

Even though our hotel felt like a Covid trap, with a guy behind the desk who made no pretense of putting a mask on, we will remember the area fondly.

The landscape was spectacular and the parks were so diverse despite being less than an hour apart. The badlands were rolling layered hills made of clay. The black hills included an area called needles, in which rock formations called Buttes dove out of the ground creating huge tall stone structures. The kids had a blast climbing on all of it.

Before we headed to Mount Rushmore we went to see the monument of Crazy Horse, who defeated Custer in the Battle of Little Bighorn. We’ve been diving deep into the history of this land, and are learning about the repeated attempts of the indigenous people, over hundreds of years, to reclaim their land.

One of our goals for this trip was to make it educational as well as fun.  We weren’t sure we could make it happen, but so far I think we’ve done pretty well. And we’ve had some help.

Have you ever heard of the App called Gypsy Guide? Guys, this is a find. If you ever take a trip to the national parks you must use it. Its basically a traveling tour guide who gives you info as you drive, following your progress on the map. We learned about the battles of the indigenous people, the nomadic movement, the infiltration of the US, and even what movies took place in what area (Tsuri and I rewatched Dances With Wolves because we were in the exact spot the movie takes place.) the kids were as riveted as we were.

Luckily, my son is in 4th grade so he’s learning about the Westward Expansion. His lessons fit perfectly with the landscape we are passing and the history we’re learning. Its so great to bring the dry descriptions on his computer to life.

So by the time we went to see the 4 white guys on the mountain the kids understood the complexity behind the monument. Perhaps my favorite moment at Rushmore happened while I was getting us ice cream. I chatted with the server (who was probably the only person in South Dakota who wore a mask) about how many tubs of ice cream he goes through every day. He said – “especially vanilla”. “Really?” I said “chocolate is obviously the better choice.” He answered – “Well people want the full experience”.

I guess he felt safe to make that joke since I was his only mask-wearing ally and unfortunately that is a political statement as much as it is a health precausion these days.

As we were leaving I took another look at the monument and it seemed to me like there was a 5th face, hiding over to the right. This one was not sculpted by man but rather by nature. The expression was thoughtful, knowing, peaceful. I imagined it was Black Elk who managed to get on that mountainside after all.

From there we took a long drive to the most southern point of Montana. The 5 hour drive was so grueling that my daughter actually got out and ran alongside the car at one point. Whatever it takes.

In a week our trip will change drastically. We will have toured Yellowstone and won’t be rushing anymore (most of the areas in the park will have closed.) we won’t have a specific goal in mind. We can go anywhere. We can stay for as long as we want.  That will be a very welcome change for all of us.

I have a fantasy about what our routine will look like. Although we know that no mother’s fantasies ever come true. But just the thought of a regular schedule makes me feel warm and fuzzy.

Ok dear travel mates, till next time. Stay tuned to hear if Yellowstone was all that – worth the long haul, the “active labor”, the million hotel rooms, the covid risks, the parental insanity.