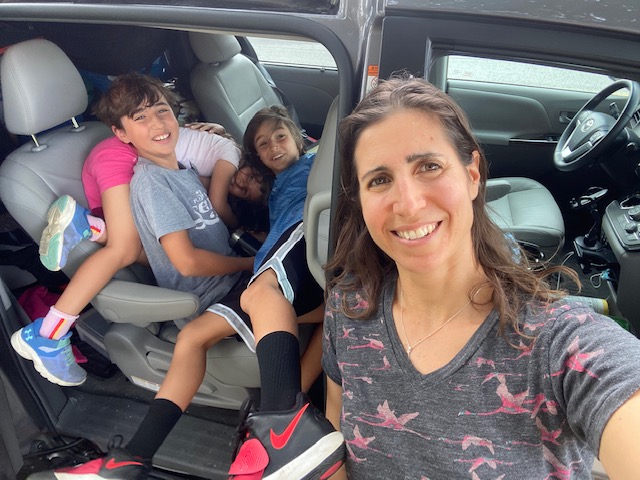 You know that feeling when you’re on a trip, and a day feels like a week, a week feels like a month and a month feels like a year? Well, here we are about two weeks in to our trip and it feels like waaaaay longer. So much has happened.

Let’s catch you up from where we left off.

After Asheville we headed to the home of country music – Nashville. On our way we prepared ourselves by listening to Malcolm Gladwell’s fascinating take on why country music makes us cry. (I’m going to analyze this fully in my Baby in Tune blog, if you’d like to subscribe : )

Walking up and down Broadway was exhilarating even during COVID times. The windows to the bars were all wide open and all the venues had performers. I mean ALL the venues, one next to the other. It was as overwhelming as it was thrilling. My eldest considered it a cacophony while my daughter was elated. Later, when we met up with musician friends who brought a guitar, she had music pouring out of her and they jammed into the sunset (to see snippets of this improv follow me on Instagram. It’s hard to attach videos here).

I was so impressed by the level of musicianship in Nashville. I know that’s what it’s known for, but it was still breathtaking to see that even at 6:30, traditionally a bum slot for musicians, the performers kicked ass. I’m sure the 10pm musicians were even more outstanding.

While in town we hit the Country Music Hall of Fame, the Patsy Cline Museum, and the Johnny Cash museum. It was inspiring to be near old artifacts of the greats, and for a second, feel their journey, drive, and passion for music.

After Nashville we headed to St. Louis. We got there in the evening, set up the exhausted kids with TV and pizza, and Tsuri and I went out to explore on our own a bit. This was the first time he and I were alone for even a moment since the trip started, and it was NEEDED. One challenge that I didn’t foresee (but duh) was the toll the trip may take on our relationship. With so much moving around, late night drives, transitions, easing the kids’ anxiety, planning, and working in between, we haven’t been the most attentive and patient with each other. Hmm. More on that in another post.

We visited the beautiful arch, stumbled on to an RGB vigil which I was so grateful for, and ate at a good restaurant. All without kids complaining that the walk was far, the monument was boring, and the food was spicy. WIN.

The next day we either earned ourselves a spot in the Most Kick Ass Parents Hall of Fame or the Most Irresponsible. Or both?

My grandpa used to say – “plan your work and work your plan,” and that’s exactly what we did, godammit. We went to not one, not two, but THREE museums, all in the first part of the day, and then drove 5 hours to our next destination. Sigh. I know.

The thing is, we just couldn’t give up on any part of the plan. The City Museum was hands down the best museum I’ve been to. It was a free exploration through caves, slides, aquariums, and castles.

The Blues Museum was part of our music series – Country in Nashville, Blues in St Louis, Jazz in Kansas City. And the kids got to record their own blues tracks. We had to!

And the Lewis and Clark Museum because we are following their expedition trail. Of course! At night I’ve been reading this book about westward expansion to the kids. And now, leaving from St Louis, we set off on the very same route as Lewis, CLark and Sacajewea. The museum didn’t disappoint. It had life size replicas of their boat, dioramas of key moments including meetings with the indiginous people, and models of the animals and fauna they encountered.

Then we drove 5 hours. And then the kids were starving. And then we didn’t have a place to stay because we didn’t know if we would actually make it all the way to Kansas City. And then we stopped at McDonalds because we needed to feed the beasts that our kids had become.

(side note – the Happy Meal is NOT meant for anyone over 4. Did everyone already know that? If you’re looking for 6 fries, 4 tiny nuggets and a huge cheap toy, it’s the choice for you.)

Anywho, Kansas City was next. Unfortunately it may not get a high rating in my memory. We arrived late, very excited to settle into a place for two full nights. But after we put the kids to bed we opened the curtains and realized our windows looked onto the breakfast room. So that was our three restful days of work and school – in a cave with no natural light. Very Lewis, Clark and Sacajewea- like. Here’s a view from our room. (ps. I complained and got a free night in a hotel to come.)

But Kansas City was very welcoming nonetheless. We roamed the fountains, the WW1 Memorial, and had a lovely picnic dinner with musician friends on the grass who played soccer with the boys and 20 questions with my daughter.

And then we kept driving and arrived in Nebraska. I’ll fill you in on that next time.

So now after two weeks of traveling we’ve hit a tiny bit of a groove. There is no doubt that COVID makes our trip VERY different from normal times.

Here are some ways we’ve been navigating traveling in 2020:

We’ve definitely gotten answers that haven’t put us as ease (like – we don’t require masks here, or the hotel was full last night,) in which case we say – not this time y’all. Shout out to Marriott who have been doing a fantastic job of maintaining COVID standards! Yay!

Will we get struck by COVID nonetheless? It’s possible. Do I have late night freak outs about the ice cream parlor where too many people weren’t wearing masks while we had to wait on line? Hell yes. Is it still worth it for us to be on this trip? We think so.

Thanks for joining me on this journey. Onward and westward!